skip to main | skip to sidebar

We are now in Prague. Prague has brought us cold weather and many new friends. One was a boy from London named Ashley. He told me I had a boys name and even spelled it the boys way. I was nice and didnt respond back. Today we went to a church where everything was made out of human bones. I was morbidly fascinated with it. I think I am going to post all the pictures I have of it because really when else in your life will you see a cross or chandelier made out of bones. We have really enjoyed being in Prague, but we are all excited to return to the homeland "Germany" tomorrow. I realize that Germany is not my homeland but it feels more like home than anywhere else we have been. Today we met a 68 year old Texan who was traveling by himself and decided to be our tour guide for a while...we loved him. More on him later when I post pictures.
Posted by Ashley at 9:50 AM 8 comments:

I love Budapest. It isn't at all what I was expecting. I guess I was expecting a more war-torn third world type country, but it is actually very pretty and looks like the pictures I have seen of London. Yesterday we arrived in Budapest on the Pest side which is the nice side of the city. Our hostel is one of the nicest we have stayed in the whole trip. We walked up one of the main streets to an area that had some statues, a zoo, a park, a museum, and a castle. It was a lot of stuff crammed into one area. This morning we woke up really early and checked out the Parlimant(sp?) building that was designed to look like the British Parlimant. Then we saw St Stephens Basilica and a bunch of communist statues. We then took a tram over to the Buda side of the city which is a little bit more ghetto and more how you imagine Budapest to be. We were trying to find a Chinese Market but we couldn't find it so we walked up this huge hill to a church that looked over the whole city. Budapest has been great and tomorrow morning we are leaving for Prague.
Posted by Ashley at 10:55 AM 2 comments:

We are now in Hungary. Since my last blog we have visited Bologna and Venice, Italy. We were suppose to take a night train from Venice to Vienna, Austria the other day, but the Italian train union decided they wanted a day off of work so they held a strike. We had met a nice Canadian boy named Maije at the train station who told us we could spend the night in cabins at a near by campsite, so we hopped on a bus from Venice and headed to the campsite. Our cabin was very nice but also very hot. I cant remember a time in my life I had been as hot as I was while in Italy. The next morning we went back to Venice and took a 9 hour train ride to Vienna. As soon as the train arrived in Vienna we got on a train headed to Sopron, Hungary. So we didnt exactly get to see Vienna, but we saw all the scenery headed into and away from it. It is interesting being in Hungary because I dont understand a single word they say. Today I almost caused an international incident when some lady kept talking to me and I finally just started shaking my head, put my hands up, and said No repeatedly. The problem is that No doesnt not mean No here. Nem is the correct word for no. German has a lot of words that seem like English and I know basic phrases like "do you speak english" and Italian is a lot like Spanish so that makes it easier, but Hungarian isnt like anything I have seen or heard before. Amy's brother is here on his mission, so today he and the other missionaries went to lunch with us and ordered for us so we could at least eat some good food. Otherwise we would just have to point at what we want. They also taught us to say some phrases like "I dont speak Hungarian" and "Do you speak English". They did tell us that everyone basically speaks English in Budapest so we shouldnt have any problems once we get there. Well I hope you are all doing well at home and are anxiously awaiting the blogs full of pictures when I get back home.
Posted by Ashley at 6:43 AM 5 comments:

I know these blogs can be pretty boring without any pictures. Yes we do have cameras, but we didnt bring any of the cords we need to connect our cameras to the computers. Dont worry though, because when I get home I will have an entire blog of the best pictures of the trip. To answer the question of how hair can be a mullet and a mohawk well imagine if you will a typical mullet. Now imagine the sides are totally short but then at the top of their head they have a mohawk. So it is a mohawk with long curly hair at their necks. Today we are on our second day in Rome. We saw the Trevi Fountain, Spanish Steps, Pantheon, Roman Forum, Colosseum, Palatine Hill, and St Peters Basilica. Tomorrow I am going to sleep in while everyone else goes to the Vatican Museum. I have been to the Vatican Museum before and as great as it was I dont want to pay the money to go again and secretly I dont actually like Museums. If you would ever want a more detailed account of what we are doing here in Europe feel free to check out my friend Katies blog. She is one of my friends listed on the side.
Posted by Ashley at 6:54 AM 1 comment:

I am still alive

So the pink eye is pretty much gone, and I am in every other way healthy, so I am finally able to enjoy my trip a little bit more. Right now we are in Florence but are leaving for Rome tomorrow. Today we sat in a park for an hour, walked around a lot, and took a train to see the leaning tower of Pisa. Don't worry I also ate some gelato today. The gelato count is now 2 yesterday and 1 today. We have had a fun and relaxing time in Florence and have done a lot of people watching. I secretly wish that American boys would do their hair like the Italians. It is a mix between a mullet and mohawk. Well, I will report more maybe tomorrow.
Posted by Ashley at 10:54 AM 4 comments:

So my trip has been very fun and exciting so far. We have visited Cologne, Frankfurt, Weiderstadt, Munich, Fussen, and tonight we are taking a night train to Florence. As you may have read I had strep throat before we left. Well by the time we arrived in Germany I felt all better. Then this morning I woke up and had PINK EYE! Who over the age of six gets pink eye? I am apologizing to Teresa now for staying at her house with pink eye, but for all I know she gave it to me. Just Kidding! No one else in my group has been sick at all and hopefully it will stay this way. As I am writing this though, I am starting to feel my other eye starting to get sticky. I feel bad for the person who uses this keyboard after me.
Posted by Ashley at 10:56 AM 4 comments:

In 2 hours and 55 minutes my plane will be taking off for Germany! Make sure to keep checking my blog because I plan to update it every few days with all of my adventures. I think my strep throat is pretty much gone, so hopefully I will be totally well by the time I arrive in Europe. Hooray!!!!
Posted by Ashley at 12:01 PM 2 comments: 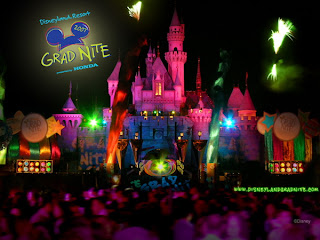 This morning I got back from chaperoning my schools trip to Disneyland Grad Nite. For those of you who don't know, Disneyland opens up from midnight until six a.m. for high school graduates. When I was in high school I went to Grad Nite and remember it being a lot of fun, but now that I am old it was a little bit different. First we went to California Adventure from 10 - midnight and that was a lot of fun because most of the other schools weren't at that part. Then I enjoyed Disneyland from 12 - 3. At 3 in the morning I wanted to die. I AM OLD! I can't stay awake that late. Four of the other chaperones and I took naps in one of the theaters for an hour which gave me a second wind until it was time to board the buses and head back to Vegas. I am now headed to urgent care because I am pretty sure I have strep throat which added to the wonderful time I had last night. I need to get some antibiotics and get this taken care of since I am leaving for Europe on MONDAY!
Posted by Ashley at 3:15 PM 6 comments: